An explanation about the preferences you can set in-game. 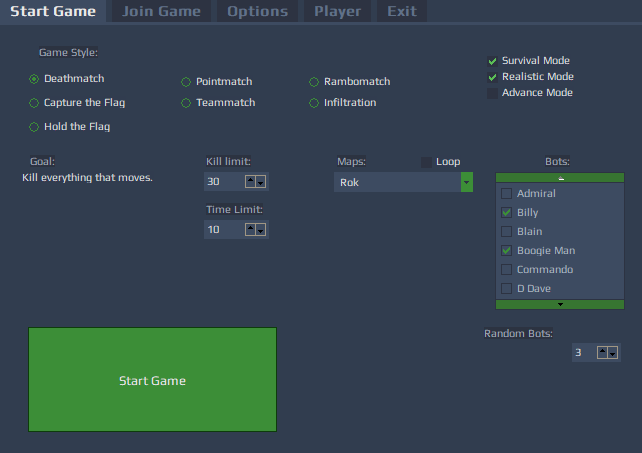 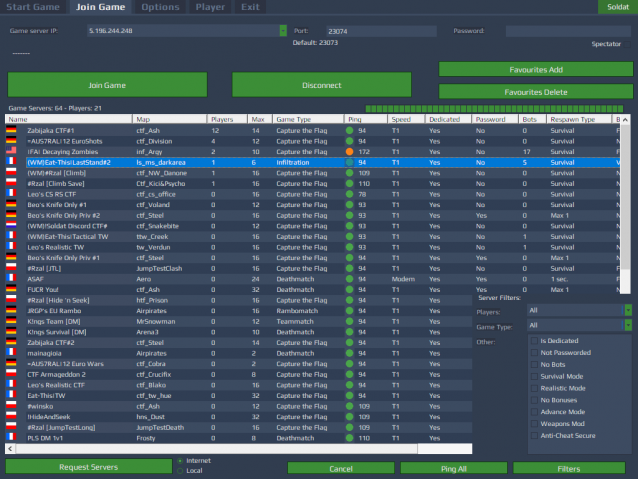 The list includes columns which allow you to sort the game by desired order, for example: Clicking the Name column title will arrange servers by name.

Additionally there are flags on the left hand side to indicate in which country every server is hosted.

Allows user to see only servers with desired values. 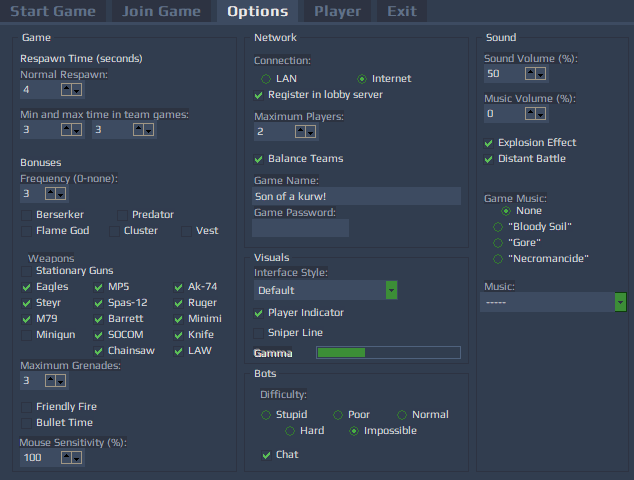 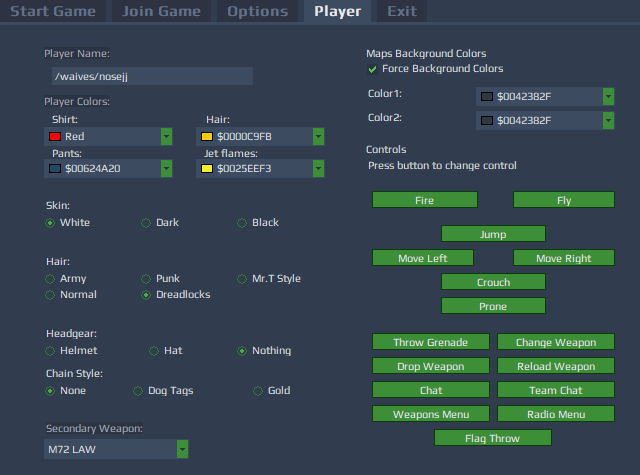 All major configuration edits for Soldat can be made in config.exe (in Soldat's installation folder). 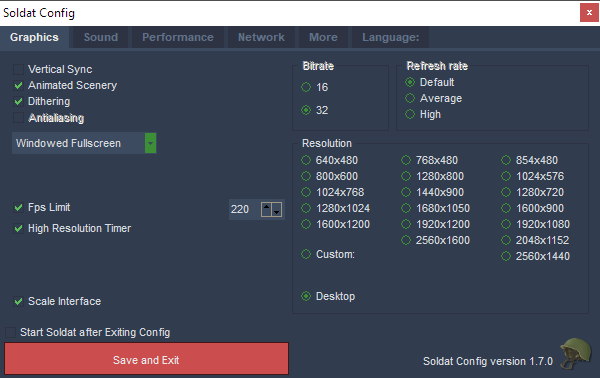 Vertical Sync (VSync) is used to synchronische the output of your graphics card (GPU) with the display of your monitor. When your graphics card has finished rendering the next frame, it waits for the monitor to finish displaying the current frame, before switching to a new one. This means that the maximum frame-rate achievable will be equal to the refresh rate of the monitor (60hz/75hz/85hz/100z/120hz/144hz/165hz/180hz/200hz/240hz).

If Vsync is disabled then your graphics card will continuously render without waiting for the last frame to be displayed in its entirety. With fast graphics cards this means that your monitor may switch to a new frame halfway down the screen. This effect is known as tearing as there appears to be a visible line separating two different halves.

(Note: Using this at the same time as FPS limiter, may cause FPS issues).

It creates a dissolving effect when fading between neighbor colors. It can help remove gradients banding in the background.

Its purpose is to smoothen hard pixel-ish polygon edges. However it doesn’t work anymore after Soldat upgraded to HD graphics. Use your graphic card settings to further smoothen edges if desired.

Limits FPS (Frames Per Second). Some players have reported that this setting can reduce stutter issues. Some others need to disable it to get a smooth experience. Try both (Note: Using this at the same time as Vertical Sync, may cause FPS issues).

Sets the color depth of the game (Example: http://i.imgur.com/V8gHETI.gif)

If you're using full-screen and don't have compatibility mode enabled then the refresh rate is being picked up and stuffed into DirectX.

Scales the interface images to your screen's resolution . 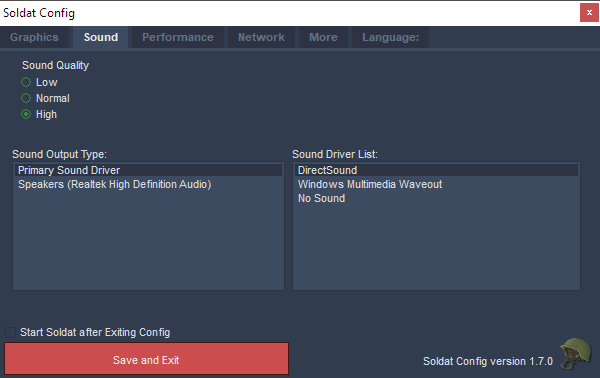 Select sound quality for the game. It affects overall quality of each and every sound heard in game (Note: Low Quality level can may help improve performance in some cases).

DirectSound will determine the driver by itself. No sound if you want Soldat to not have sound at all.

Select with Sound Device and Drivers Soldat should use to output all Game sounds. 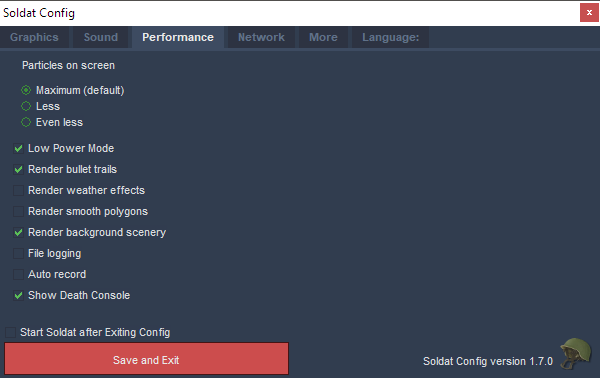 Limits the particles showing on screen. There's also a setting in soldat.ini where you can set the number of particles even lower than 'Even less'. If you set it at its lowest (Max_Particles=43) you will sometimes not see jetpacks or explosion images if there's a lot of action going on (Note: Better left at default).

Renders a trail after a projectile, making it easier to see the projectile trajectory (doesn't apply to knives) (Example: http://i.imgur.com/gqWr0df.png)

Enables rain, snow and wind visuals. (Note: If turned off you will still hear the sound of weather effects).

Draws edges around polygons when enabled. The edges images used are located in Soldat\textures\edges, and has the same name as the texture used for the map (Example: http://i.imgur.com/3QwsNZf.gif).

Turns on drawing of scenery set behind players and polygons. Might hide essential scenery on unofficial game modes and unofficial maps.

Automatically records and saves a demo of every map you play into Soldat\demos. Usage: mandatory in the competitive scene to assure fair play, movie making purposes and tactics assessment.

Shows a list of of kills and deaths on the upper right side of the screen. One can also customize the length of it in soldat.ini with the KillConsole_Length=7 value (Example: http://i.imgur.com/sHPztmi.gif).

(Note: Since the rendering of fonts is slow in soldat, turning it off can result in an increase of fps. However, this one's a major advantage for game-play so not very recommended). 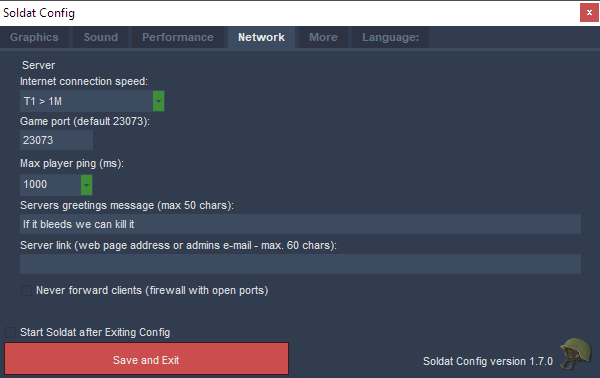 Select the type of connection the computer uses (Note: this option doesn't do anything beside putting different icon in speed tab in Lobby).

Select IP Port that you gonna use. More info about ports in the Ports page.

Select the maximum ping that users can play with on your server before getting kicked.

If the player's ping value will be continuously higher than the set value, he'll get ping kicked.

Write a greeting message sent upon joining of other users to your server.

Write here a webpage or an email in which players can contact you.

This feature is broken at the moment. 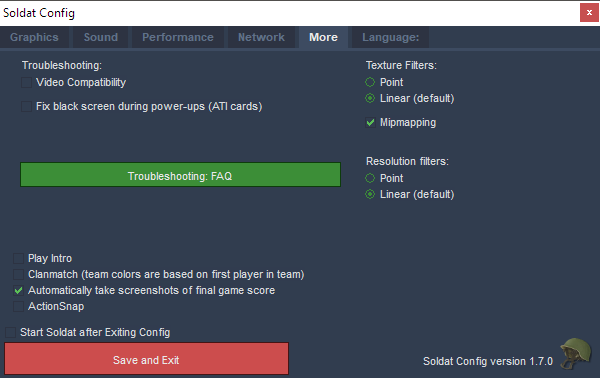 This function may improve performance for older GPUs. It forces OpenGL to use "fixed pipeline" (meaning no shaders). Examples: 1, 2).

Changes how the pixels of the map texture are interpolated when the textures are stretched (Note: Better left at default unless you're running on a low-end computer)

Generate pre-filtered versions of texture or scenery, so that when you render it at a smaller size, it has both good looks and fast performance.

Changes how pixels of the render target texture are interpolated when the texture is stretched over a screen area that has a different resolution than the resolution of the texture itself (Note: Better left at default).

Team colors are based on first player in team

Mandatory in some leagues such as SCTFL

Press F5 after Killing/Dying and you can view+save that special moment! 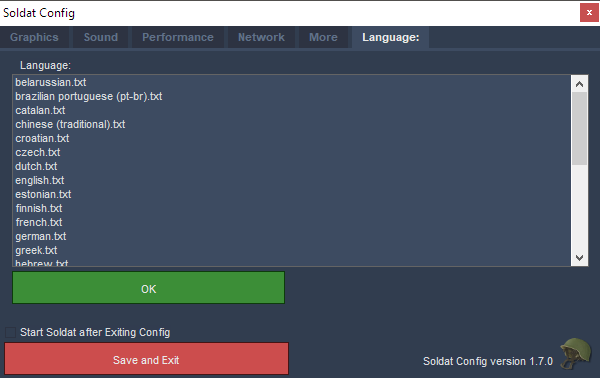